Officially, according to Audi, the TT MKI (BVP-code engine, but I think also for the rest) can have two types of plans revisions, depending on the oil we use (with or without specification "Longlife") .

Basically oils with specifications "Longlife" have a useful life of two kilometers of a synthetic oil "normal". This means that if Audi recommends synthetic oil changes " normal "every 15,000 km or 1 year (whichever comes first), with an oil " Longlife "can be extended to 30,000 km or 2 years .

I personally prefer to follow a maintenance with synthetic oil "normal", as I believe that the current quality of these oils, known brands (Castrol, Mobil ...) are quite high, while it gives me more peace of mind knowing that the oil is working "clean "for a greater percentage of their useful life.

oils, in addition to these specifications, referring to the quality standards that meet, also have another value to be into account when choosing it, is that the oil viscosity based on this temperature.

This value is usually defined by an indication of the type XwY (eg 10W40). The mean values:

In practice, the two will involve the following values (unless I misunderstood it):

- The oil pump will have more difficulty moving this to the different parts of the engine due to the resistance that causes a higher viscosity , which implies that cold during operation, the lubrication of the engine will be less.

- Because of this increased viscosity, cold will lower oil consumption , as it will be more difficult transitions to the combustion chamber.

So to sum it up, when the values of X and Y are more distant (5w50 or 10w60 ) oil is more stable , have a viscosity less differentiated between cold temperature and operating temperature).

Even so, a 10w60 oil will not always be better than, say a 10W40, as to consider the specifications the manufacturer (values of tolerance parts, engine operating temperature ...).

Choose what is appropriate will depend on several factors:

- the car manufacturer's specifications (tolerance values of the internal parts ...).
- outside temperature (winter - summer.)
- Miles Engine (internal tolerances between parts are higher due to wear).

We can see in the picture below a box manufacturer recommendation for Ford Probe model, depending on oil viscosity in temperature.

In the first review of my TT (which was done before taking delivery of the car), oil was chosen Agip 5w40 , because I think a compromise suitable for outside temperature, engine kilometers and manufacturer's recommendations.

However, for the second oil change I choose a Castrol Magnatec, with the same viscosity (5w40). 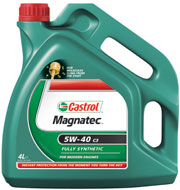 After 15,000 miles with this oil, the performance was also satisfactory. 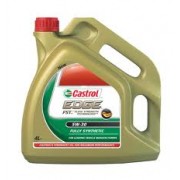 Although the degree of viscosity is lower, which could lead to higher oil consumption, performance has been good, with consumption similar to the above.