The Audi TT is a sports car produced by German manufacturer Audi since 1998 in Gyor, Hungría, which was produced and the mechanical part is coupled with the body that came from the German factory in Ingolstadt.
Two generations of the TT, both with the front transverse engine and available in coupe and convertible body with two doors and front-wheel drive or four-wheel (quattro). The first generation TT coupe and have a current configuration of 2 +2 seats, while the convertible has a setting of 2 places.
Prototype TT
The TT was first presented as a prototype at the Frankfurt Motor Show in 1995. The design is credited to J. Mays and Freeman Thomas of California design studio, owned by Volkswagen, with Martin Smith contributing to the interior design was the winner of several awards.
The name is a reference to the TT race, which dates from the early twentieth century, Tourist Trophy, the British island of Man.
Design of TT
The TT's styling is seen by many as a key moment in automotive design. Since its introduction as a prototype in 1995, and as automobile production in 1998, the design is seen as brave, innovative and revolutionary. While the car borrowed a few design elements from earlier vehicles, the overall design was considered by many to be truly unique. Despite its soft curved so attractive, aerodynamic design does not take aa revolutionary (the coefficient of TRAWLER body was actually relatively high, 0.35). But with its distinctive design, rounded body, great use of anodised aluminum exposed, and lack of defined bumpers, the TT represented a departure from much of the styling that dominated the automotive market of the time.
First-generation TT (1998-2006)
The production model (internal designation Typ 8N) was launched in September 1998 coupe body, followed by a convertible in August 1999

Length / width / height / Battle - 4041 / 1857 / 1346 / 2423 mm
Were based on the Volkswagen A platform used in the Volkswagen Golf, Skoda Octavia and others. The differences with the prototype are the bumpers and the inclusion of windows in the rooms behind doors.
First became available with a petrol engine of 1.8 liter 4-cylinder, turbocharged, 20 valves . During the first two years of production, both front-wheel drive models such as the quattro had a feature version of 180 hp (132 kW) . In 1999 he launched a more powerful Quattro model, equipped with an engine of 225 hp (165 kW) that shares the same basic design but with a larger turbocharger, an additional intercooler on the driver's side, forged connecting rods, and dual exhaust some other internal adjustments designed to withstand the increased pressure turbo 10 psi to 15 psi.
All TT models were called for review in late 1999 and early 2000 following concerns about driving the car, which was considered unstable in turns at high speed as a result of acceleration to oversteer. They made several changes that were incorporated in all future models:
In 2002 he was presented a limited edition of 100 units called Lemans , which fitted the engine of 225 hp 1.8T , and equipment had a different version on the standard 225-hp
The range of four cylinder engines was supplemented with engine VR6 3.2L 250 hp (184 kW) at the beginning of 2003, incorporating the quattro drive system total. In October 2004 opened a new transmission called DSG (dual clutch) , allowing better acceleration through a drastic reduction in time to change gears.
In mid 2003 the extended range of engine power 1.8T version to include access to the range of 150 hp .
Developed a version of Audi TT with some notable improvements in 2005, the " quattro Sport ", and relieved with increased engine power 1.8T with 240 hp (176 kW) and a top speed of 250 km / h.
The last year of production were enhanced versions 1.8T 150 hp and 180 hp , passing power of 163 hp and 190 hp respectively.
Prizes

The original TT was nominated for the award of the American Automobile of the Year 2000 . He was also the " List of Ten Best Cars "for the magazine Car and Driver in 2000 and 2001 . 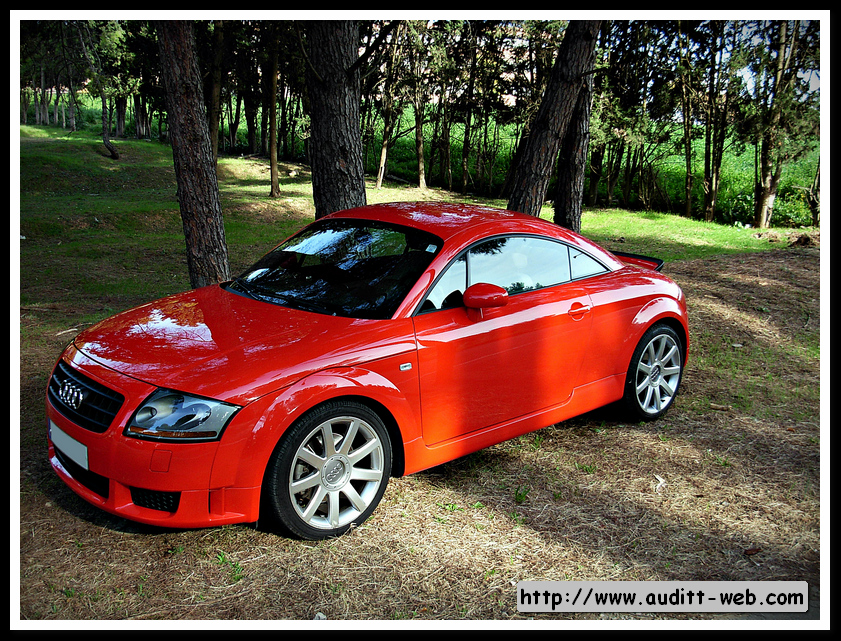